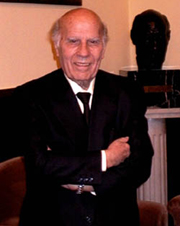 One aspect of the brain's circuitry that we hold central to its functional organization resides in the thalamo-cortical connectivity. In this presentation three issues were analyzed and discussed, all of them has been the subject of recent research with results that are relevant to the current conception of the cerebral mechanisms underlying the global functional states of the brain.

First, the author reviewed the historical development of the concept of specific and non-specific thalamo-cortical systems (MORRISON & DEMPSEY, MORUZI & MAGOUN, JASPERS). Special attention was devoted to morphological data obtained with new tracers techniques as concerns the intralaminar nuclei in monkeys, the importance of the reciprocal character of the thalamo-cortical connections and how the cortico-thalamic fibres are much more numerous than the talamo-cortical. The importance of the layer of termination in the neocortex eas analyzed for both the specific and non-specific fibres. Of great interest is the recent work by the group of E.G. JONES and cols. on the chemical identities of thalamic neurons of the relay intralaminar nuclei, nuclei of the middle line of association. The data show that a set of diffusely projecting thalamo-cortical neurons, whose axons terminate in superficial layers of the cortex, is distributed throughout the whole thalamus, unconstrained by nuclear borders of by differences between intralaminar and other nuclei. These neurons from a background MATRIX to the whole thalamus and show inmunoreactivity to CALBINDIN. Upon this matrix, in certain nuclei, a CORE of middle layers projecting thalamo-cortical neurons is superimposed, their thalamic distribution is constrained by the classical nuclear borders and are particularly enriched in the sensory and motor relay nuclei. Every nucleus of the thalamus, intralaminar, middle line, relay and associational contains matrix neurons buy only certain nuclei, including sensory and motor relay, contained core cells, which show inmunoreactivity to PARVALBUMINA. The role of the matrix cells, diffusely projecting in the thalamo-cortical function was discussed, above all as concerns the role of the matrix system of neurons in the temporal conjunction of the specific and non-specific systems activity.

Second, the electrofisiological properties of the thalamo-cortical neurons and the circuits were discussed. Thalamic neurons have two mode of operation, the relay mode characterizing EEG desynchronized states (Wake and REM sleep) and the oscillatory mode, characterizing EEG-synchronized states (drowsiness, slow wave sleep). These two functional states arise from the interaction between intrinsic membrane properties of thalamo-cortical neurons and the properties of the complex synaptic network in which they are embedded. The firing mode of the thalamo-cortical cells depends on the membrane potential level. From a depolarized level a suprathreshold depolarizing pulse evokes a tonic discharge, whereas from a hyperpolarized level it evokes a brief high frequency burst of fast sodium-dependent spikes, rrding on a slow calcium-dependent spike. The state dependent fluctuations in membrane potential result from extrinsic synaptic influences: morphophysiological data sugget that cholinergic neurons of the pedunculopontine and laterodorsal legmental nuclei are largely responsible for moculating the operation mode of the thalamo-cortical cells during transition from EEG-synchronized to EEG-desynchronized state.

Third, Magnetoencephalographic (MEG) recordings performed in awake humans have revealed the presence of continuous 40 Hz. oscillations over the entire cortical mantle. Phase comparisons between the oscillatory activity recorded from different cortical regions revealed the presence of a phase shift of some 12.5 msecs. between rostral and caudal poles of the brain. Concerning the mechanisms underlying this 40 Hz. activity the LLINAS' hypothesis was discussed. Specifically, sparsely spiny layer IV neurons which are able to generate intrinsic 40 Hz. oscillation would produce an inhibition-rebound sequence in the thalamic projecting pyramidal neurons. These pyramids would then generate a 40 Hz. inhibitory-rebound oscillation in neurons of the reticular thalamic nucleus, a group of gaba-ergic neurons projecting to most of the relay nuclei of the thalamus.

Thalamic neurons also oscillate intrinsically at the same frequency. Consequently cortico-thalamic pathways could be led to resonant oscillation at 40 Hz. Reticular cells would then be responsible for the synchronization of the 40 Hz. oscillation in distant thalamic and cortical areas. Recent research on MEG recording in humans demonstrates large 40 Hz. coherent magnetic activity in awake and REM sleep state and it is very reduced in delta sleep. The 40 Hz. oscillation may be reset by sensory stimuli in the awake state but not in the REM and delta sleep. Because 40 Hz. oscillation was seen in wakefulness and dreaming it was proposed it to be a correlate of cognition, probable resultant from coherent 40 Hz. resonance between thalamo-cortical specific and non-specific loops. As the non-specific system is concerned with the inner life of the individual, the state of homeostasis and motivation, and the specific system with the content of the external world, the hypothesis was presented that the specific loop, gives the content of cognition, the non-specific loop gives the temporal binding required for the unity of cognitive experience. The conclusion was that consciousness is a product of thalamocortical activity and the dialogue between the thalamus and cortex the processus that generates subjectivity, the unique experience we all recognized as the existence of the self.