By the middle of the 18th century, Spain had seen the emergence of numerous forums focused on various cultural and scientific topics of the day. It was out of such a context that a group of doctors, surgeons and pharmacists would take part in early evening intellectual gatherings at the home of D. José Ortega at 9 Montera Street. Informal conversation touched upon the advancement and nurturing of medical, surgical and pharmaceutical colleges in Madrid. This undertaking, fanned by some obvious desire to breathe new life into the medical field in and around the Spanish capital, would eventually blossom on 12 july 1733 into the Madrilenian Society of Medical Literature (Tertulia Literaria Médica Matritense).
This was only the modest beginning of a larger endeavour which was to be made one year later. On 12 August 1734, the Society's original statutes were modified and it became the Madrilenian Academy of Medicine (Academia Médica Matritense). A royal decree would mark the organization's approval by King Philip V one month later. The new institution would thrive under the auspices of the royal family, whose support for the academy would be undying. Conditions were set for a larger membership and widening of its range of disciplines, which were now to include Natural History, Chemistry, Physics and Botany. The naming of Dr. José Cervi, at that time the most eminent physician in service to the royal family, as the academy's director highlighted a desire by the House of Bourbon to have a firm hand in academic life.

The project had thus become reality as a new age in scientific activity had come to dawn in Madrid. Its statutes would be successively modified over the years; unfortunately, such modifications are only partly known, as archives from the period 1752-1791 were lost. And this period is especially interesting as it is marked by the deaths of Cervi and Ortega, as well as by the incorporation of the work of the eminent Valencian physician, Andrés Piquer. It was also during these years that the Academy contributed to both the creation of the Botanical Garden and the mammoth undertaking of the publication of Joseph Quer’s Flora Española.

Archives detailing current activities of the Academy once again become available for the years beginning in 1792. New statutes grounded in its constitution were sanctioned in May, 1796, and a plan was established for true incorporation into the realm of modern European scientific thought. The plan also called for a systematic calendar of activities touching upon topics ranging from medical topographies to descriptions of endemic and epidemic diseases. Treatment of such topics was pedagogically sound and mindful of such issues as bibliography, forensic medicine, hospital management, medical politics, plagiarism and regulation of medications and therapies.
The Medical Academy thus became an instrument with which the Bourbons could arduously attend to the general public but without having to deal directly with it. An impressive list of academics, among them Gimbernat, Mutis, Casal, Virgili, Virrey y Mange, Lacaba and Hipólito Ruiz would embark on the enormous task of preparing a wealth of dissertations and medical reports which were published in 1797.

The next century would be as turbulent for the Academy as it was for the nation in general. The French Revolution and Napoleonic Wars had a deleterious effect on the scientific infrastructure which had been so carefully fashioned. That which had long been considered culturally conducive suddenly became threatening. Accordingly, the academy attempted to maintain the lowest possible profile with regard to academic activity, protocol and fiscal matters.
All would be to no avail, however, as in November, 1824, the Supreme Governmental Medical Commission ordered closure of the Academy, which would last for the next four years. In 1831, the administration of Castelló would manage to approve a general set of guidelines for all literary works within the Royal Academies of Surgery and Medicine, organizations firmly under the control of the Commission, and install its own university – until then a marginalized institution within the academic world. Such control would be iron clad until the death of Fernando VII. The period which followed (known as the era of isabelina) began to see the rebirth of academic activity, along with an eventual sanctioning of new rules in governance of a Madrilenian Royal Academy of Medicine, a landmark in its history as it went on to officially become the National Royal Academy of Medicine.

This new regime would replace years of intellectual isolation, repression and control with a veritable and unbounded code of academic freedom which would flourish until the present, except for the tragic period of the Spanish Civil War of 1936. Until the start of the war, the Academy of Medicine had enjoyed a “golden half century in the healing arts”. It had been during this time that numerous physicians gained prestige in their specialties. The subsequent animosity and repression which was tragically borne by the nation eventually subsided into yet another fruitful era of slow but steady restoration of academic values and successive statutory reform. Such would blossom into the select group of physicians, surgeons, pharmacists, veterinarians, biologists, physicists and engineers which now silently yet efficiently go about the business of safeguarding the nation’s health and health care system. 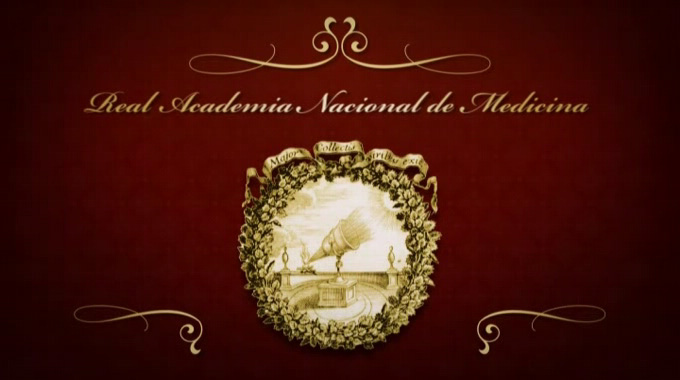 Our medicine’s history can be told as many forms. One of these can be following the path of the 50 seats of the Royal National Academy of Medicine, dedicated to different specialties. From pharmacology to rehabilitation, from gynecology to cardiology, or from psychiatry to neurology, and so on to half hundred disciplines symbolized in each one of the academic seats. The recent edition of the DVD "Historia de los Sillones de la RANM" represents a thrilling travel through the life and work of many of the biggest names of the Spanish medical science.